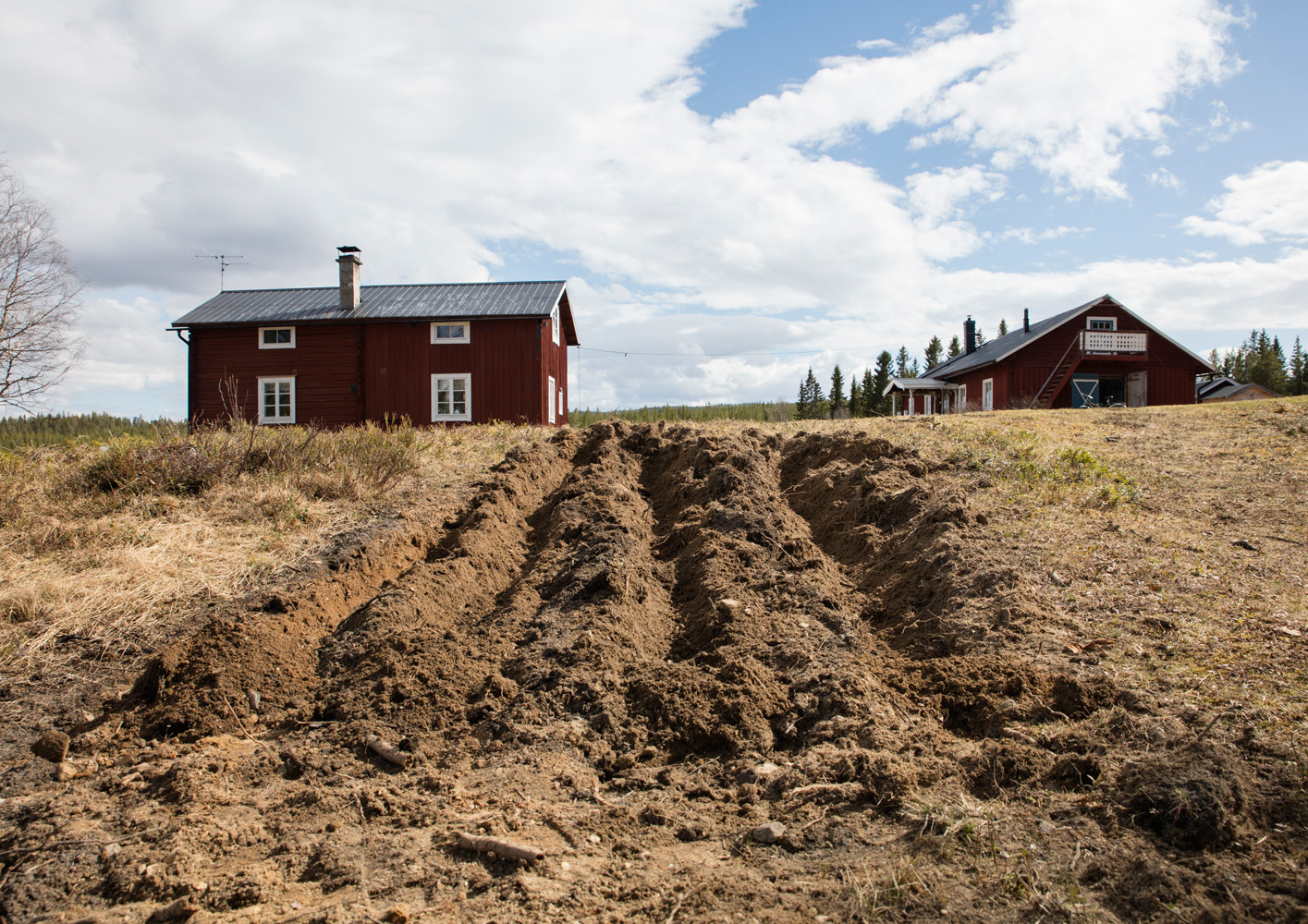 Finally the snow is disappeared. One month later than usually. And the snow came even earlier this winter than it used to. So we had snow from late October to mid-May, and for us it was a great pleasure to see the grass again. There is still plenty of snow in the mountains. We have had so much snow this year that they expect the flood of water from the mountains to the lake to hit the record of year 1995. The snow is the rainfalls in our region so the warmer the winter is the more snow we get.

As soon as the snow disappeared we spent a lot of time and efforts working in the garden. Our garden is almost 2 acres, so although we don’t exactly have many flowerbeds, here is really a lot to do. Shrubs that grow as weeds and invade the grassland. They need to be removed and the thickest sawed over. We have several times made large fires for burning branches and twigs from the removed trees.

Moved on giant rocks that were on the bottom of the lake on our boat’s way from boathouse. The lake’s water level is controlled and lowered due to a dam 8 km from where we live, so we had to hurry to remove rocks before the water would rise again with spring flood of melting snow. The water rises quickly and on a hot day the water can rise by up to 30 cm. There are 4 meters between the highest and the lowest levels. Work is underway to restore the lake’s level permanent as it was before the dam was built. Furthermore, it will have a positive impact on wildlife in and around the lake and the ice in the spring will be much less dangerous and the dangerous cracks will be avoided.

The big project for spring and summer for me is growing vegetables. As a child, my family was very close to being self-sufficient, but unfortunately I have not been taught so much about the knowledge of growing vegetables. In short, I am a beginner and have had to ask the experienced people for advice. It is also different what can grow here and what can grow in Denmark. The summer here is really short. I started by growing the seeds indoors and then later planting the sprouts when the night froze is not an issue anymore.

I have built boxes with high edges. They are not straight and crooked but I am convinced they can make my vegetables grow.

I have sown beetroot, kale, carrots and leeks. And a lot of salad. “If you can’t make the salad grow, it’s bad,” they said in the plant shop … What a performance-enhancing comment but it was said with sweet optimism. And I have got cuttings for strawberries, which I cross all fingers for we will taste this year.

Then we’ve come to the potato chapter. They have almost caused a marital crisis. Orest, which grew up in Ukraine, where most of people in the cities had utility gardens at the times he was teen. Every year, his mother forced him to help with the cultivation of potatoes. As a teenager, he remembers nothing more embarrassing than being met on the street dragging 10 kilos of potatoes… Next was the location of the small potato field. It was suddenly impossible to find a space of 3×3 meters in our garden with the size of a smaller park. It should be mentioned that potatoes must be grown near the water edge; otherwise they will have difficulty growing. These are wise words from local people. They actually grew potatoes on the small-uninhabited islands in the old days.

Something about the ground is being warmer near the water. We finally found a location when I stubbornly refused to give up my potato project. But it was tough. It was done by hand and an old plow originally used with horses. We tightened the tractor to it instead. And just as potatoes were planted in the ground we are told that the cranes love potatoes, so we had to better hurry to have an installation made to scare them away. Then Santa cloths came into play, with the shiny wig. Think he does his job well – I haven’t seen the cranes … yet.

But what a pleasure to enjoy the warm weather has come. Our canoes and boat have been launched into the water for the first time. We have white nights these days. This means we have light all day round for the next two months. There is something magical about these days. You get so much energy from the light. Paddling on mirror calm water surface on a late night or early morning is, for me, the most calming and relaxing I can do. We have always paddled a lot on holidays and it has simply become a sacred ritual and one of life’s best moments.

We use the motorboat when we go to the village to pick up our post. It is definitely the fastest way to sail across the lake. And the dogs love to join us in  the boat.

Before it becomes too romantic storytelling I get presented here, it must also be mentioned that the mosquitoes are crazy here…. It is always exciting, whether it is a mosquito year or a moderate mosquito year. So far it has been more acceptable, but we have also couple of ideas about mosquitos. Among others we think that we have far fewer mosquitoes here than when we lived in the rented house in the village.

The beech sprouted on June 1 and here it has grown green with record speed. And if you have not yet planned a summer vacation, we still have available periods in our rental house.