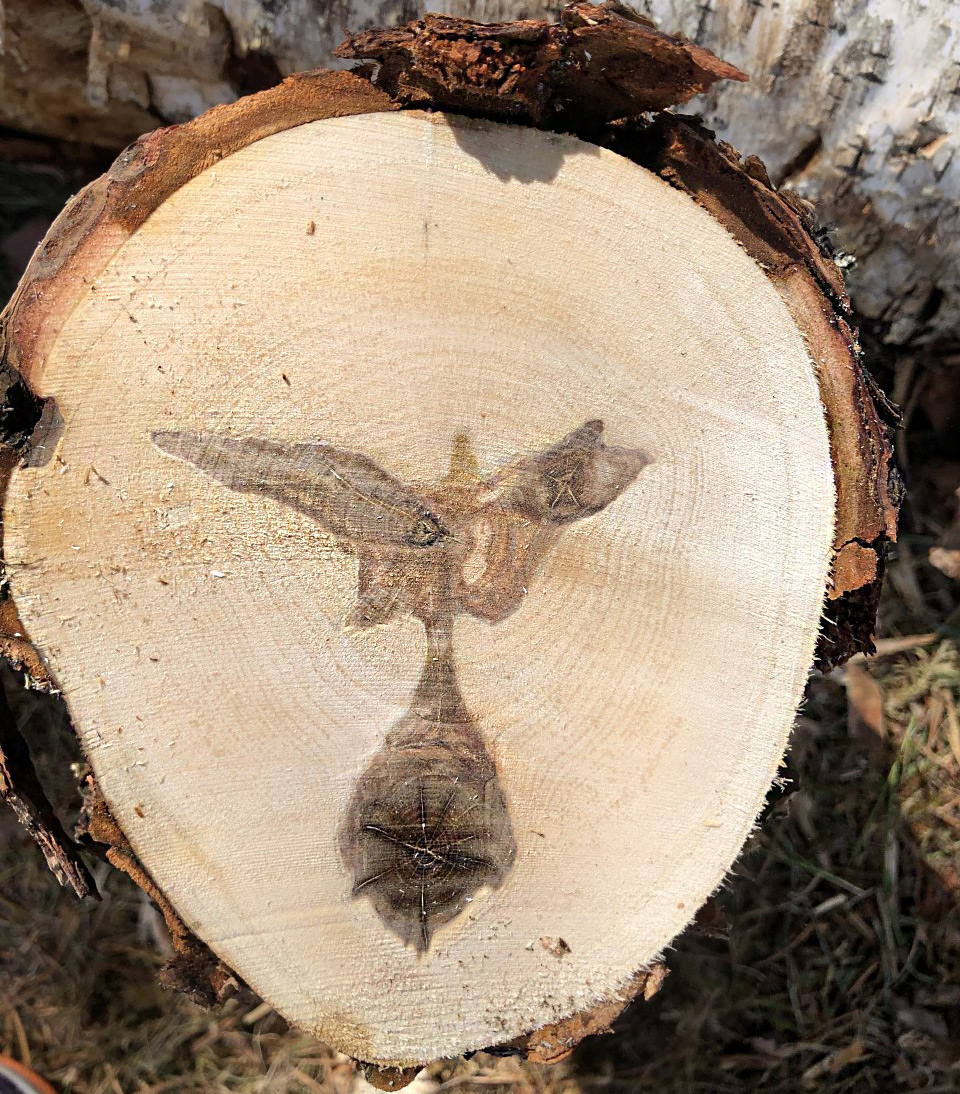 Most of the summer has passed, and if there is one thing that has filled up much of our time, it has been firewood splitting. We have also been on a short trip to Denmark, had a heat wave, celebrated Swedish Midsummer and seen a bear.

Let’s start from firewood- the ambition was to cut down trees for firewood by ourselves, but that project would have taken the whole summer… Firstly, because the snow remained until the end of May, and secondly, because of our lack of experience in tree felling. The actual transport from the forest to our home was also not something that could be done in a day or two. Instead, we ordered whole birch trees in amounts of approximately 20 cubic meters, which we had to saw for approx. 20 cm long  pieces and then split them. And this was the hardest and heaviest job we have ever done. And then it was a time consuming project. It took 2.5 hours to split 1 cubic and the forces were only 2 cubic meters of wood per day. I would like to guess that a single tree piece can weigh up to 100 kg and there were about 200 of them.

It took us a whole month to split firewood for winter usage. We hope it’s enough for the whole winter – but it depends on how cold and long the winter will be. Firewood is our only source of heat. But the work is not over yet, because we still need to stack it inside. It must be done before the snow comes. Now the firewood is lying out for drying, unless there will be a weather forecast with heavy rains, then we’ll need to cover firewood.

In June I unfortunately lost a family member very unexpectedly, so we hurried to Denmark for the funeral. It was a sad occasion to travel and it became a very short stay. We had rented a trailer for a week, so we could take home the rest of our things on the way back. The whole drive to Denmark and back took us 4 days round trip. We had room for almost everything in the trailer, but still we had to leave a few boxes of books, because the trailer was dangerously close to overweight and the car was filled to the breaking point.

To my great frustration, but to the great delight of our guests, it turned out that our much-loved and absurdly expensive Dux bed, which we brought from Denmark, could not get up in our bedroom. It has now become a guest bed. But it happens we go to the other house just to sleep in our comfortable bed.

After all, it’s nice to be surrounded by our own things again, after living a year and a half in other people’s things and things we have not chosen by ourselves but they were part of the property. And so I have carpented a bookshelf, which I mean I managed to do quite good.

We returned from Denmark in mid-June to an unusual heat wave in this region. For over a week, the temperature rose up to 30 degrees Celsius, which is very unusual for such a long time. The water in the lake reached 24 degrees! It must be very close to a record. We could constantly swim in the lake those days. It was such a luxury to be able to get up and jump into the water without getting a cold shock. Now the water is back to a more normal 12 degrees Celsius.

In the middle of the heat wave, it was a celebration of midsummer. A very old Swedish tradition and an important event when people gather, eat herring and sing songs. Last year we were in Estonia on Midsummer’s Eve, so this year it was the first time for us in Sweden. We were visited by Anna, who has her summer house 4 kilometers from us, and she had brought herring, which is the traditional meal this day of the year. She both showed us and told us how this evening is being celebrated. However, we did not sing any songs, but we made a traditional midsummer sign. It was a cozy evening, where we could sit outside as long as we could tolerate mosquitoes and other insects. We are already looking forward to next year.

After midsummer the days start to get shorter. You think summer has just arrived, and then we face darker times. The evenings are slowly reappearing after two months of light 24 hours a day. I don’t know if we are completely ready for a long and dark winter again. Unfortunately, we haven’t found a solution for the electricity. We had hoped we could. A decision has not yet been made in the case and it seems that it may drag out. We do not have money for solar panels and batteries this year, so the winter will be like last year, with water from the lake that we have to pick up every day, oil lamps and a wood-burning stove. Fortunately , the summer is still here, so we are gradually getting used to the darkness and the cold. After all, we are more prepared this year and we have bought a used snow thrower machine so that this winter we can plow the road for snow and driving by car to and from our home. But I must honestly admit that I am a little nervous about the coming of winter and about what the job situation will look like. We take it one month at a time, trying to have confidence that it is going to be ok for us.

Right now we are enjoying that it is still summer. And the mosquitoes are gradually disappearing as we get closer to the autumn. Enjoying my home-grown lettuce and kale that is just growing and growing. Still waiting for the coarser vegetables like beets, carrots and leeks (which one of the dogs has been dug up halfway) to grow large and ready to eat. But what a privilege to be able to pick up your own fresh salad. I love it.

And then to the famous potatoes. While I have been writing this blog, we have for the first time seen cranes dangerously close to our potatoes, and unfortunately it looks like they have already been there ..! Santa has obviously lost his authority, so now I want to go out and cut strips of plastic bags so that there is a little more “activity” in the field. Was actually afraid they would die, because suddenly the leaves started to turn yellow. They’ve obviously got a bit of night frost. We had two nights where it was minus degrees in the village on the other side of the lake, but I think we stayed around 0 degrees because we are so close to the water. The experienced local people say they should probably survive, so I bet that.

And then I will end this blog with, in my eyes, a great experience. I’ve met a bear ! A scenario I have seen for my inner self countless times, and it was certainly much more dramatic than it turned out to be in reality. I was out cycling with our “neighbour” Anna, and approx. 15 meters in front of us a bear jumped across the road. The bear was scared. We were not. We were actually more curious. It was not that big. Maybe between 1-2 years old. But psychologically, it has done a lot for me. I’m no longer afraid to walk alone in the woods, and I do not get scared of the slightest noise in the forest. It was a big experience.