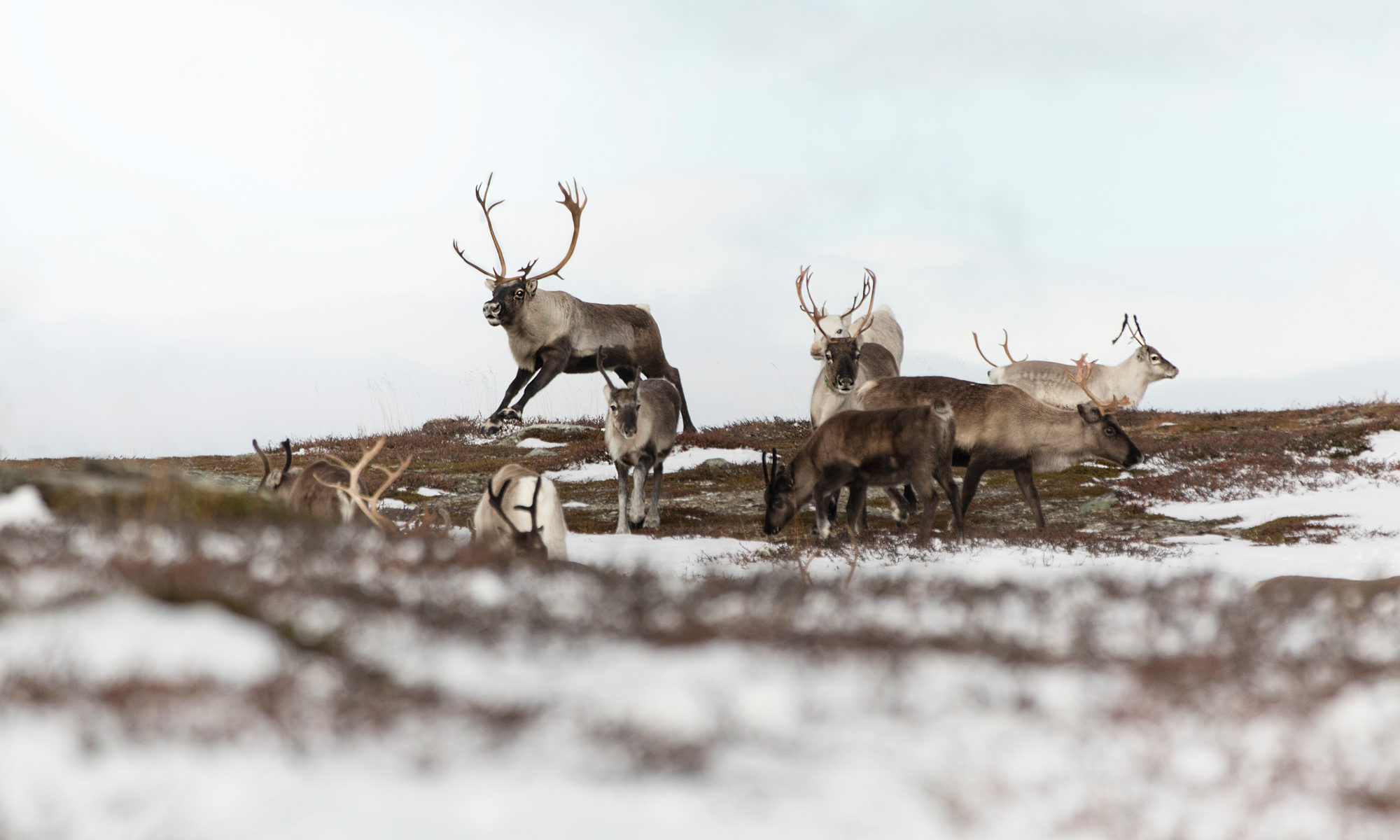 This month’s blog is dedicated to wildlife, which we have to deal with in a completely different way than we have been used to. The animals are everywhere – they move freely and you meet them every day.

I want to start with the wolf. We had been looking forward to hearing the wolves’ growl at night. I have always been so fascinated by the wolf, but I have never seen or heard one, even though we have wandered so much in the wolf’s areas in many different countries. But what we quickly learned was: ” wolves – you don’t talk about them – you shoot them”. We live in the middle of the Sami land, so where the reindeers are kept, there is no place for wolves. There may be a single one wolf, but otherwise there are no wolves in the area. So the hopes of someday meeting one are probably more luck than reality. In the fall, however, we saw traces of a wolf very close to where we live. I still romanticize the wolf… but after seeing how big a paw it had, the romantic part has waned a bit.

And now when we’re talking about predators, there’s abear – the Scandinavian brown bear. This is my personal big fright. I am really afraid to meet a bear, and I know that chances are high, because we have chosen to live in the most bear-rich area in the Nordic region. This was something I found out first after we moved. And people see them. And this happens quiet often. At this period during spring, almost daily, you hear that he or she has seen a bear in the region. And today we even walked past a freshly made blackberry. It’s a nice reminder that you have to look over your shoulder…. Fortunately, they sleep half the year, so you have a breath. But when you walk in the woods every day, the bear is always in your mind. If the dogs stop because they have heard something, my heart beats really hard and fast and the blood disappears from the head. In the summer months the dogs are on a leash in the dense forest and where there are far from settlements, and then they wear bells. Alone for the reason that they must not surprise a bear. The Nordic brown bear is the most peaceful of its kind. After all, it’s a comfort even if a man was attacked in the area a month before we moved here. No, – attacks on humans are incredibly rare, but more frequent, when dogs are involved. Some dogs try to escape from a bear, while others stay and challenge it, and we do not know how our dogs will react at such a situation, and we will do everything possible not to find it out. But it is always a compromise between free life and “protection”, you are giving your dogs. The worst thing a dog can do is get scared and run away towards its owner. It makes the bear run after the dog. If, on the other hand, the dog starts barking and running around, the bear will be “pacified”. Our dogs are of the breed borzoi and they are sprinters. They can run 60km / h against a bear’s 40km / h but when it comes to endurance, I don’t think if our dogs win … But even though I’m very scared to meet a bear, something pretty magical happens when you walk in the woods. I’m less scared when I’m out there than when I’m sitting at home and imagining it. It’s all the time I am afraid while walking in the forest, but when the dogs hear something and the forest is tight, then the only thing I think is BEAR. Orest is more relaxed regarding bears. He sometimes goes alone on a hike with overnight. I would never dare to do the same.

One of the animals that we have never given a thought to is a capercaillie. A bird with the size of a pheasant and it is just fearless. More exact to say, that the male one during the mating season is absolutely fearless. The males are black and the females brown, which is making it easy to see the difference. We’ve heard stories about how they can attack anything that crosses their path, but didn’t really speculate on it until one day we met a male one standing in the middle of the road. Orest managed to slow down the car to approx. 10 km / h, but instead of flying away, it went directly into attack on our car, so the feathers flew to all sides. Some say it is especially targeted at red taillights. We don’t know if it survived, but it flew to the side and there was no blood on the car, but it had left a giant feather just as nicely mounted on the cooler.

The male capercaillie is a bird you see quite often, and not a bird to go and be afraid of, but just remember that it does not move out of the way during the mating season.

The moose – you can’t avoid it. They are a symbol of Sweden’s wildlife and a frequent visitor on the road. It’s not because you see them every other day, but you come across it at least 1-2 times a week. Most often it is a cow with calf. And how often you see them depends on the seasons and the vegetation. In the fall, it is not unusual for them to come close to settlements while in winter they are in the forests. The moose hunt starts on the first Monday in September. Some say the moose are so smart that at that point they search to the villages because they know they are protected. Maybe it’s just a joke.

The first time ourdogs met a moose, they reacted as it was something very exciting they could hear behind a hill close to our house, but when the moose came up, you could just see that the dogs  were thinking: “shit… ..that’s a huge animal” , and they became completely disoriented about how to relate to it. Our dogs belong to the mouth group and they are the dogs that hunt with theirsight. None of our dogs follow tracks in the forest, and they live by the principle “out of sight-  out of mind”.

The reindeer are not seen in winter, but they are everywhere in spring, summer and autumn.

I’m actually amazed byhow few accidents happen to them, because they walk on and along the roads. In the summer, the big males go around town. We see them outside our house every single day. They even go into people’s garages to find shade from the sun. They look after themselves and I’ve never heard of direct confrontations. They are not afraid of people, but they withdraw when you get too close. It is a fantastic sight to see the Sami gather the reindeersin large groups and migratethem up into the mountains in the spring. It is a great experience to attend.

In winter, the animals we see most are deers. You see them almost daily, but in the summer they are a rare sight. Spring is also when the snow hares show up for a brief remark. Suddenly they are here with their spotted fur when they lose their white winter costume, and just as suddenly they are gone again. Almost think we only saw them for 2-3 weeks. Rarely you see a fox. They are most commonly heard at night. The wolverine lives here too, butwe have seen it only once. Zarwoe, our white male dog,  barked at it while ittried to find its way. Fortunately, there was no confrontation. The wolverine is known for its powerful bite.

Then here are the sea eagles that we have never seenthem byourselves,and this bird local peoplehave respect for. There is a story from ancient times that tells that a child was taken by a sea eagle and that the remains of the child were found in a nest. They then destroyed all the sea eagle nests in an attempt to drive the eagles away, buttheystillcan be seenhere. But people with smaller dogs are really scared for their dogs to be taken by an eagle, and some even say they can killareindeer, including the adults, by puncturing their lungs. We have never researched those stories, but we are sure that there is something about the talk.

There are, of course, many more animals. Mice we have become acquainted with, e.g. There are also cranes and other birds, but the ones mentioned are the ones we live with everyday. If you ever want to get on these edges, we would recommend seeing the great reindeer walks in the spring.

Well then there is a mosquito, but it is dedicated to its very own blog.